Last week’s poll was all about BINDING!

The results were again just as I suspected. For a slight majority of responses (56%), the method of cutting the binding is project dependent, and the rest always cut straight on the grain. No on responded that they always cut binding on the bias, which I suppose makes sense given the care that must be taken to ensure you don’t distort the fabric when working on bindings cut on the grain. 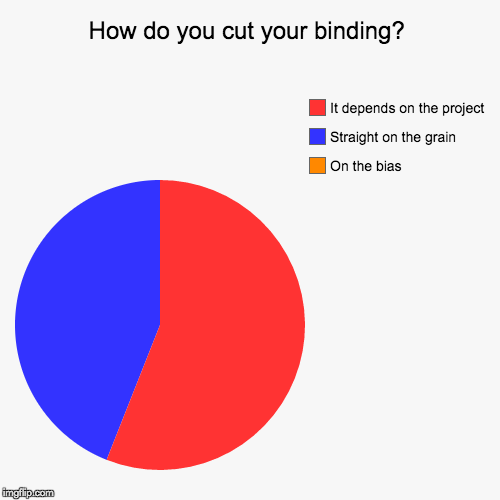 This week’s poll is all about QUILT BACKING.

This poll is about a part of the quilt that you may not see as much, but can be just as beautiful-the quilt backing! When I first started quilting in earnest, I remember quilt backs always being one fabric. It might be two pieces of that fabric sewn together, but the same fabric.

In the last few years I’ve started to see more and more quilters and artists make quilts that are almost double sided given the level of detail and intricacy that can be on the back of a quilt. Even when the backing isn’t super fancy, it’s not uncommon to see blocks, or a row of blocks sewn into the fabric backing. To me, it feels like quilt backings with pieced backs are generally more modern quilts, but maybe those are just the ones I’ve noticed.

And now, on to the link-up!

Leave a Reply to Lara B. Cancel reply